Under Armour Cash Flow Should Have Investors Running Away

"Stocklemon believes that StockDiagnostics.com is one of the best stock advisory sites on the web.  It judges companies based on a proprietary OPS rating and covers both long and short positions."---------September 22,2003 Andrew Left founder of Citron Research

"From time to time I'm asked about analysts, diggers whose work I really respect, who do things well. Tom Renna, @GFNNstock, is a must follow— Roddy Boyd (@BoydRoddy) September 7, 2013


Feb. 5,2015 -- Under Armour CEO Kevin Plank talks about why he's buying the MyFitnessPal and Endomondo apps for a total of about $560 million.
Equities Research Looks at Under Armour

Record Sales and earnings were super impressive, but a close look at the cash flow statement raises a RED FLAG.

note: As of Sunday (1/31/16) Under Armour has not yet filed their 10K annual report with the Securities and Exchange Commission as of this morning so we are not able to dig deep into footnotes and other exhibits at this time.

A look at the 8K filed on Thursday can be found here.

Before I jump to the FY2015 Negative $44 Million Operational Cash Flow, lets look at 2 recent SEC filings that should make investors wonder how many total shares are really outstanding when including Class A, Class  B and Class C shares.

"If the Reporting Person completes all the planned sales under this trading plan, he would beneficially own 35,700,000 shares of Class B Common Stock and Class A Common Stock, representing approximately 16.6% of the total shares of Class A and Class B Common Stock outstanding as of September 30, 2015 and representing approximately 66.5% of the combined voting power of the Issuer outstanding as of September 30, 2015".

Consolidated Class Action Lawsuit
August 14,2015 this DEFA 14A filing with the Securities and Exchange Commission was filed. 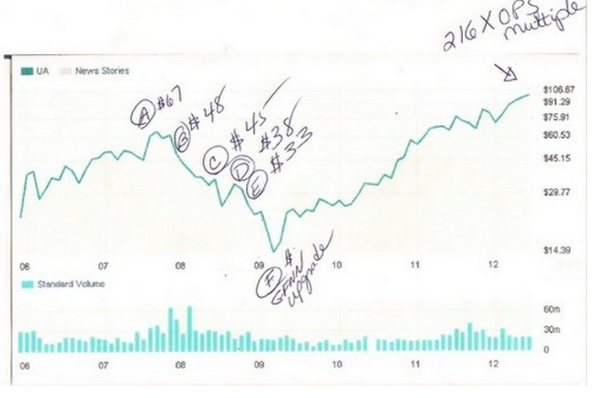 
Renna Warning on Under Armour Mentioned on CNBC-TV (Herb Greenberg)


December 2012: Stockdiagnostics the Utility
Finding Stocks that Fall 30% to 99%

Posted by Equities Research at 2:54 PM No comments:

Market Capitalization has increased by $3.3 Billion today to $19 Billion!

There is one Number that investors should be slightly concerned with though, 8k 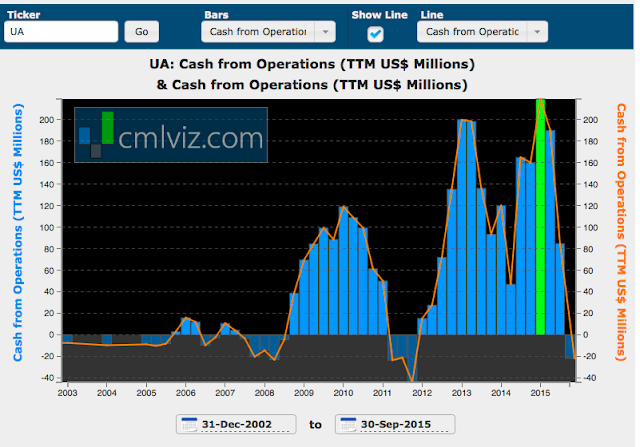 Posted by Equities Research at 2:19 PM No comments:

Email ThisBlogThis!Share to TwitterShare to FacebookShare to Pinterest
Labels: Under Armour

Posted by Equities Research at 1:11 PM No comments: