#FridayNightDump , The Best Time to Hide

When Markets close on Friday nearly every market participant from brokers, analysts, investors, money managers and even the media flee their terminals and turn their attention to their personal lives until they boot up again on Monday morning. Monday is when everyone logs back on gets plugged back into the market pulse and are bombarded with the latest news of the morning.

Experienced management from public companies that are very crafty and slick who wish to hide SEC disclosure file any unfavorable news on Friday Nights when everyone is away knowing that when the new week starts, last week's news is buried. Michelle Leder of @Footnoted coined Friday Night Filings as the #FridayNightDump

of Twitter. Every Friday night she posts about public

companies who sneak in SEC filings before the

When is the Best Time to Hide Earnings News? 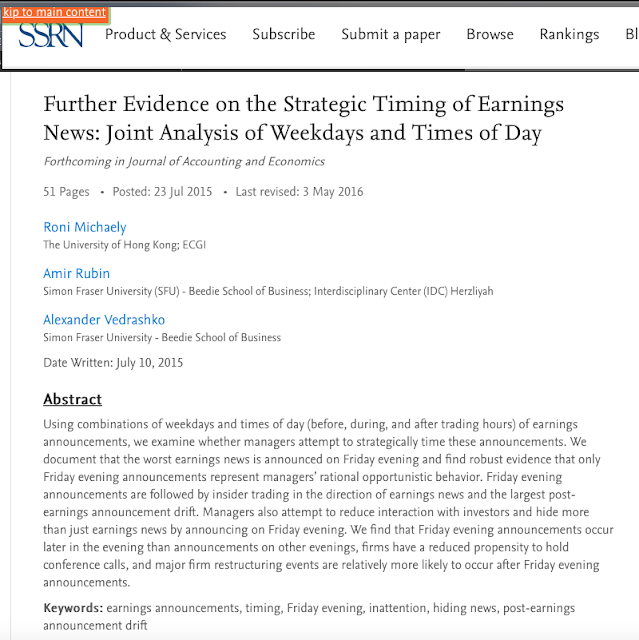 Tweets by @footnoted
Posted by Equities Research at 11:39 AM No comments:


Capital Market Laboratories
A month or two ago I came across an online financial website called
Capital Market Labs and I have been hooked on using the tools ever since.
I was so excited that I placed a call to the company and spoke directly
with the CEO, Ophir Gottlieb and praised him for creating such
outstanding research tools.

He was a great guy on the phone and
was kind enough to spend quite a bit of time with me and then floored me
when he told me that soon the site would be exponentially more powerful in
a couple weeks. Well now its a month or so later and sure enough the site is even bigger and better!


Anyone who invests in the markets should be using Capital Market Labs!

If anyone needs any help or would like to connect with me and go over the
site, I would be happy to surf the site with you. (it has a free version
and a premium version).. I don't work for the company i just enjoy using the tools.

Below is an interview on BNN with Ophir


Everyone in the Market Place should be following Ophir

Posted by Equities Research at 8:34 PM No comments:

Two Years Ago Today, A Warning That Has Been Cut In Half

On April 9,2013, the day before Titan Machinery (NASDAQ: TITN) reported FY2013 annual financials, Equities Research Warned the public that the stock @ $26.12 was overpriced based on fundamental research.

On February 22,2013 Equities Research Newsletter Subscribers were given the Warning the Febrausry Newsletter @ $28.67

Today @ $13.58 I continue to Warn on Titan Machinery as the company prepares to release FY2015 Annual financials next Wednesday April 15th before the market opens.

TITAN ANNOUNCED THEY EXPECT YEAR END LOSS OF $32 MILLION AND WARNS COMPANY IS IN NON COMPLIANCE WITH COVENANT OF WELLS FARGO NOTE, BUT CHAIRMAN SETTLES INVESTORS BY SAYING HE ANTICIPATES A 6TH AMENDMENT From the lender.

What's very dangerous for stockholders and bondholders is THE RISK of default if Wells Fargo Does NOT Amend Covenant on the terms of the $150 million convertible Note for a 6th Time.
The public disclosure that is due out in the 10K regarding how Wells Fargo will handle the company which is  expecting to be in noncompliance with the current minimum income before income tax covenant as of the end of its January 31, 2015 fiscal year.

INVESTORS LONG THE STOCK AND BONDS NEED TO HOPE THAT WELLS FARGO MAKES A 6th Amendment like Chairman Meyer Anticipates.

Posted by Equities Research at 8:43 PM No comments:

Robert Olstein, the founder of the Olstein Funds, is a top money manager on Wall Street for over four decades. The Olstein Funds have always been a favorite of mine here at Equities Research.

Posted by Equities Research at 7:24 PM No comments: