(View Under Armour warning above $40 here )
Before you step into the 2017 SEC Comment Letters and if you are  new to TITAN MACHINERY (NASDAQ: TITN) colorful stock trading, you can click here to see the history of BIZARRE hype.
Including, but not limited to: 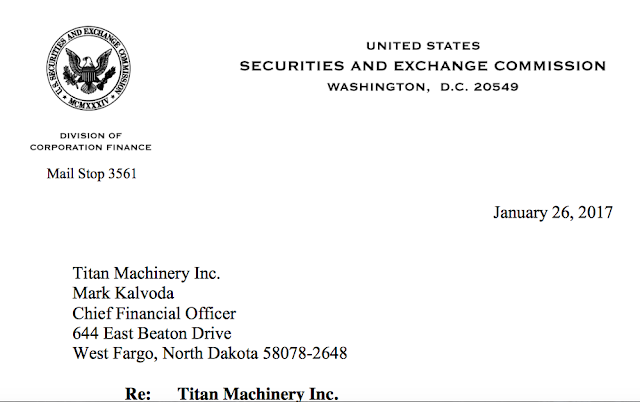 On January 26,2017 the Securities and Commission's Division of Corporate Finance sent the following Comment Letter to Titan Machinery after a review of the Company's FY2016 Annual 10K filed back in April 2016.
The Comment Letter requested clearer and more transparent disclosure regarding Titan's Adjusted EBITDA, Inventory and Wells Fargo Credit Agreement.
On February 9, 2017 Titan filed a Correspondent in response to the SEC comment letter and agreed to make changes regarding each disclosure. 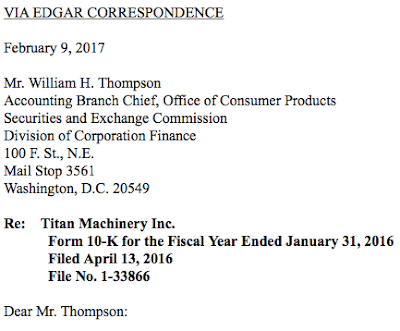 Ironically, also on February 9,2017 Titan filed an 8-K with the SEC announcing that they would be closing 15 locations and gave gave guidance to the street regarding their FY2017 Sales and Earnings which were originally expected to be announced on March 30,2017.
What's is so strange is that FY2017 ended on January 31,2017 and the company's guidance regarding  the FY2017 top line sales number were lower than the Actual Number that was reported on March 30,2017 causing the company to BEAT THE TOP LINE on the morning of the Year end press release.
What's even more bizarre is that the company expected to lose ($0.20) but instead loss ($0.31). The Top Line Beat was celebrated by Wall Street sending the shares up from under $13 on Monday to close the week above $15 at a $330 million market capitalization.

Chart is an image from BigCharts.com 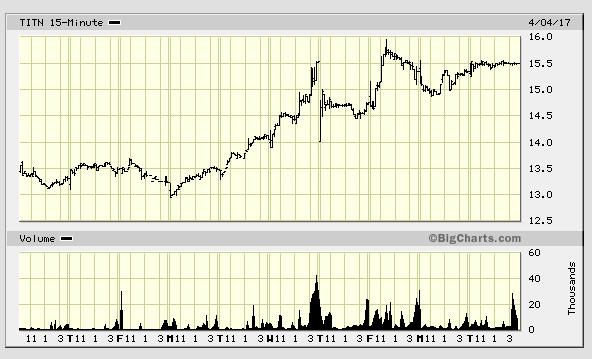 In April 2014 Titan Machinery shares traded @ $15.50 and the company reported FY2015 sales of $2.2 Billion and the company was profitable.
Over the last 3 years since April 2014 the company has reported losses for a combined ($84 Million) and recently announced FY2017 Sales of less than $800 million in equipment for the entire year.
Meanwhile the Stock closed yesterday @ $15.50 and remains at a $300+ million market capitalization.

So What drove the stock higher? Was it FY2018 Guidance?
CEO David Meyer on the conference call last week WARNED THAT Agriculture and Construction EQUIPMENT SALES WILL FALL FURTHER IN FY2018!!! 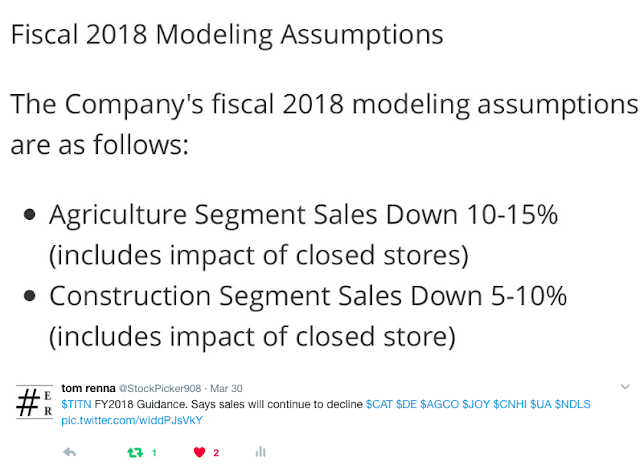 READERS at SEEKINGALPHA are asking "WHAT IS SUPPORTING THE STOCK?"

After doing some Digging to find out what was catalyst to drive this thinly traded Titan Machinery micro cap stock with a mere 21 million shares outstanding skyward.
I am not a subscriber to TheStreet.com Real Money services but I did find someone who profited from buying the TITAN SPIKE and congratulated Real Money author REVSHARK on twitter. 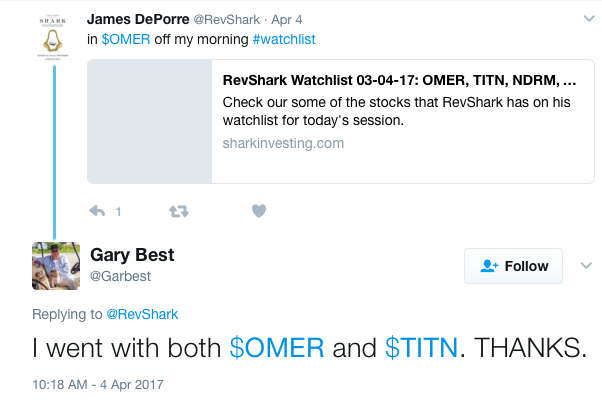 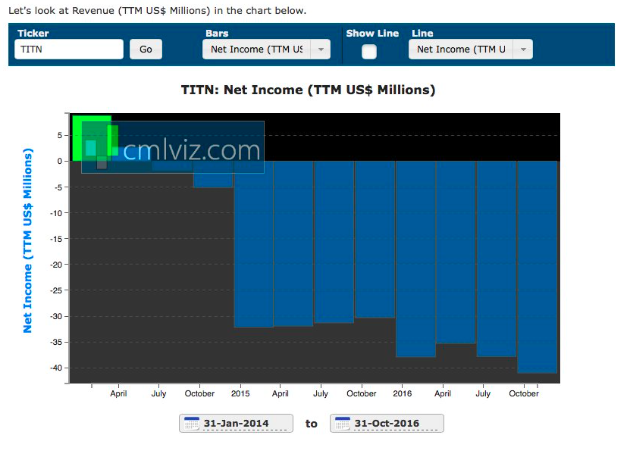 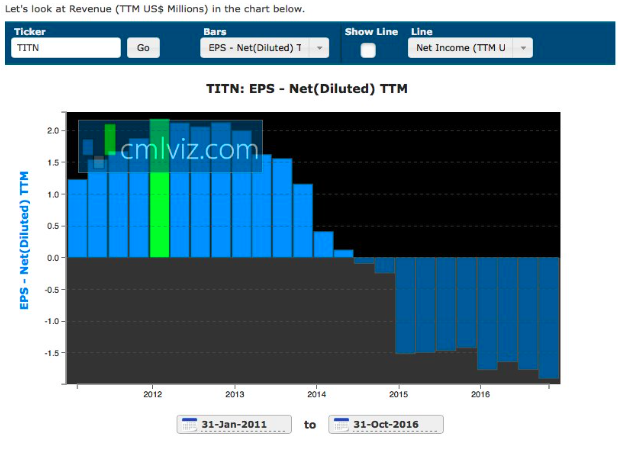 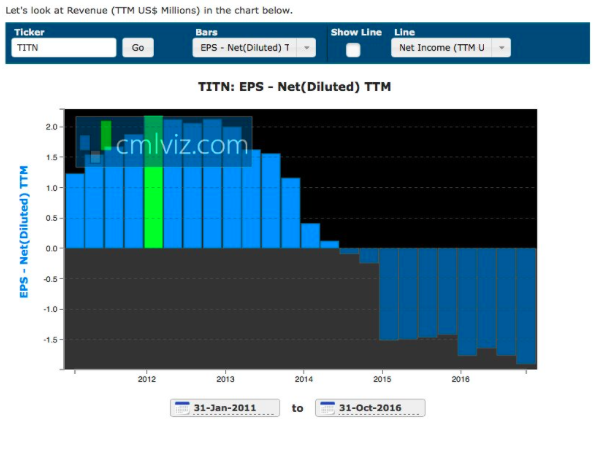 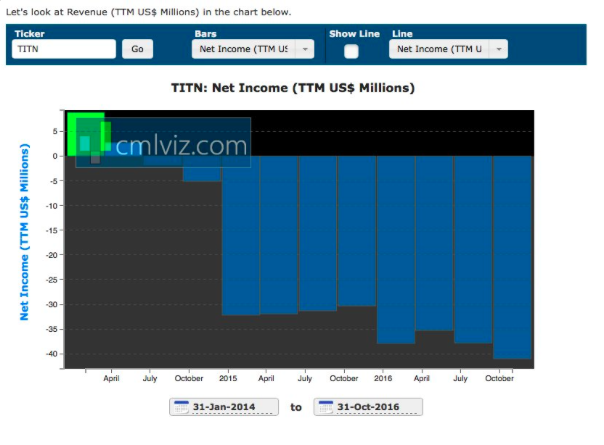 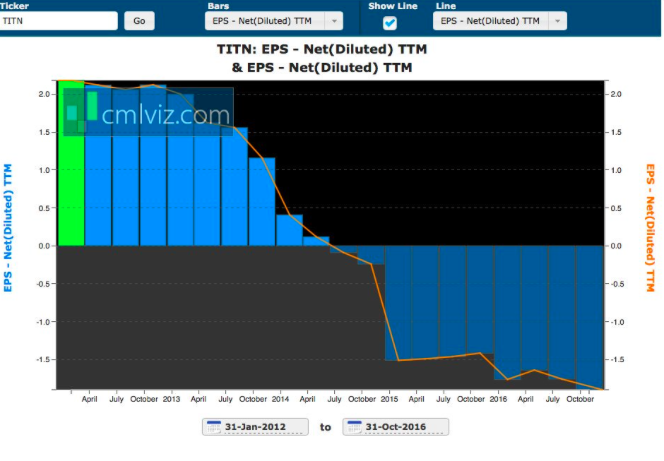 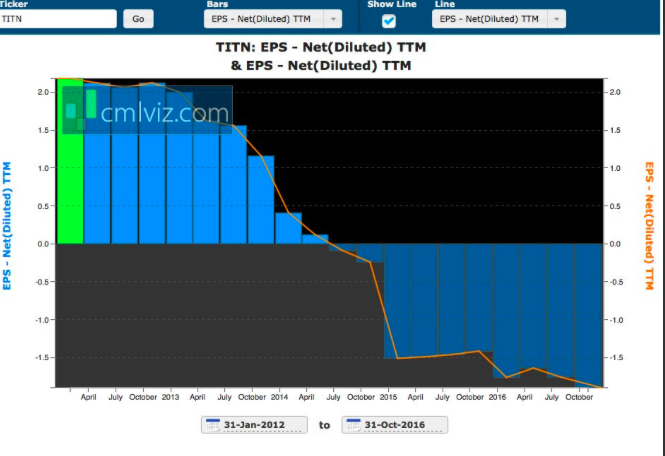 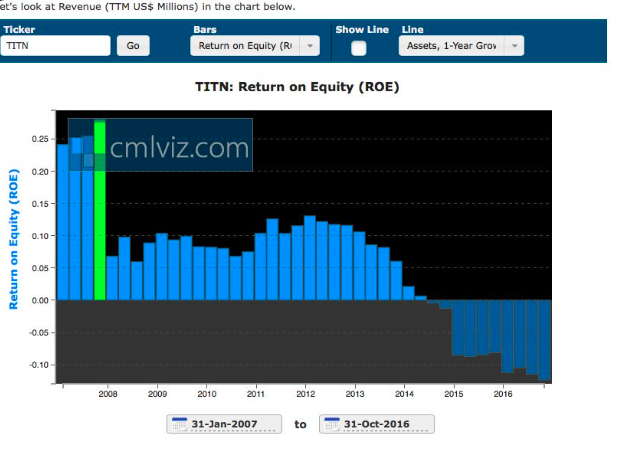 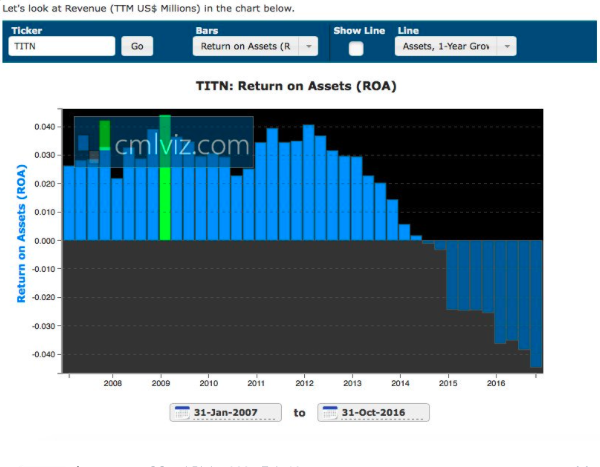 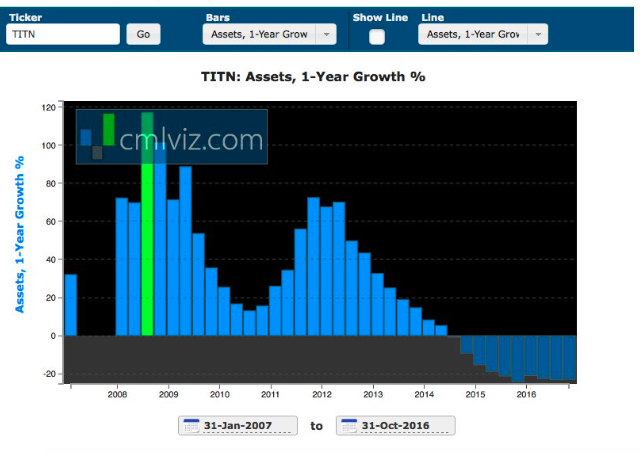 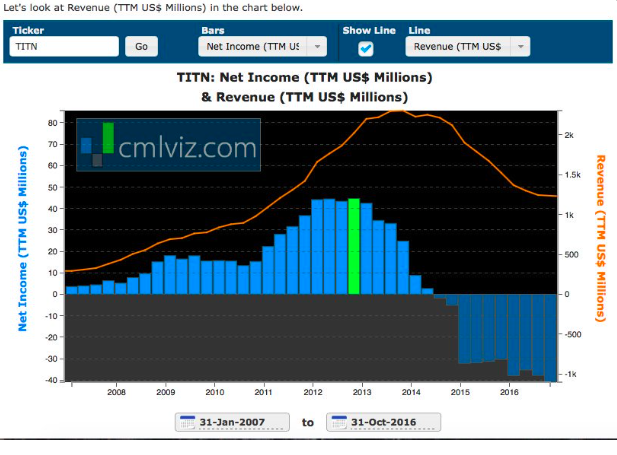 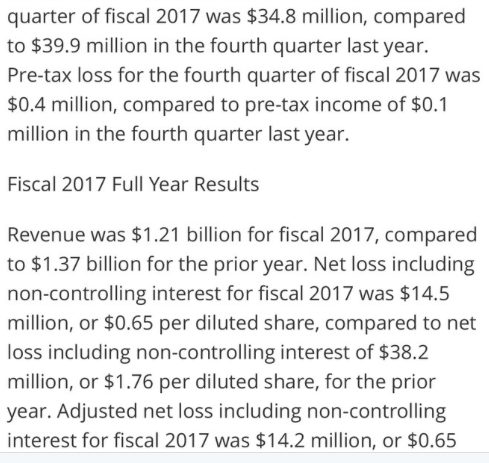 Check out this chart from StockCharts.com for TITN 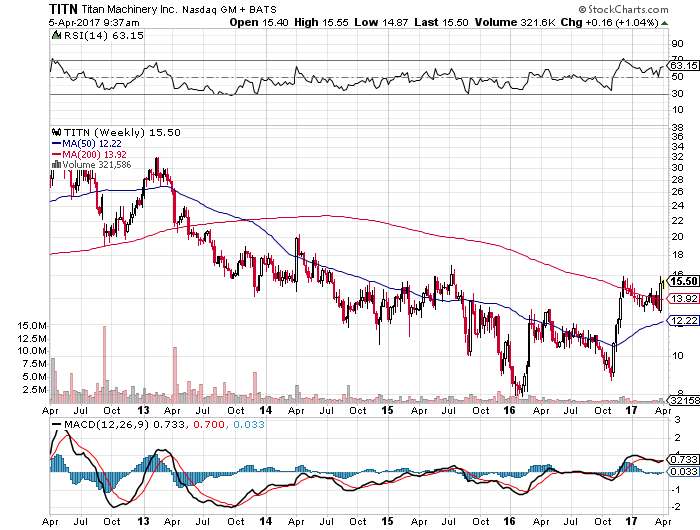 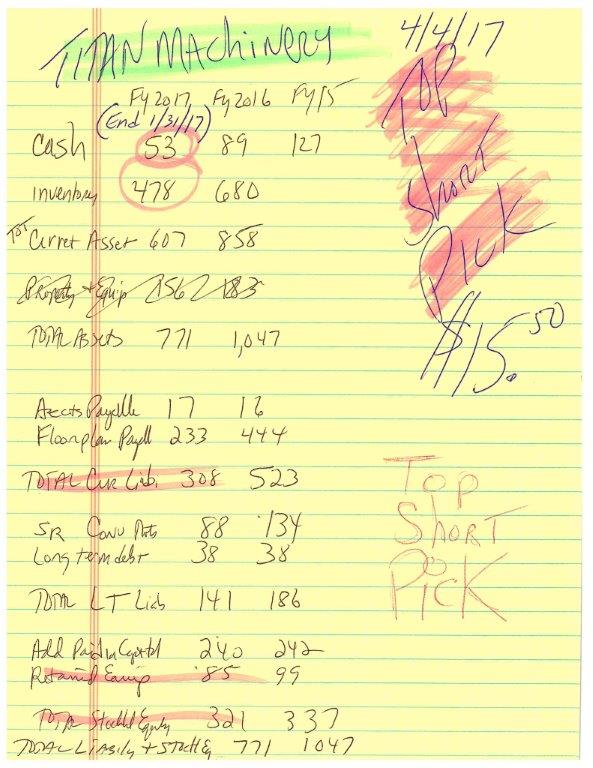 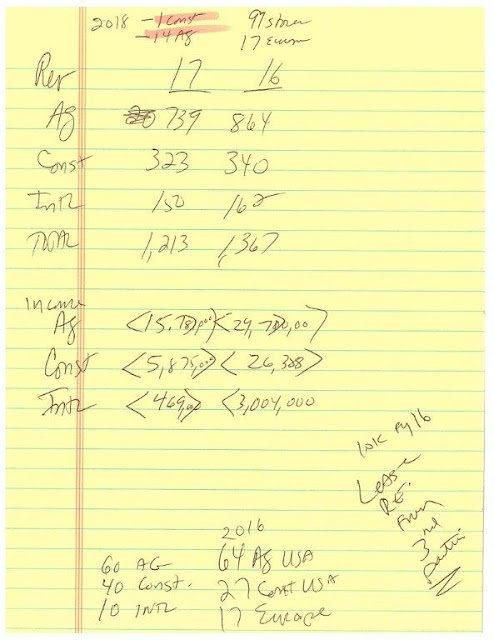 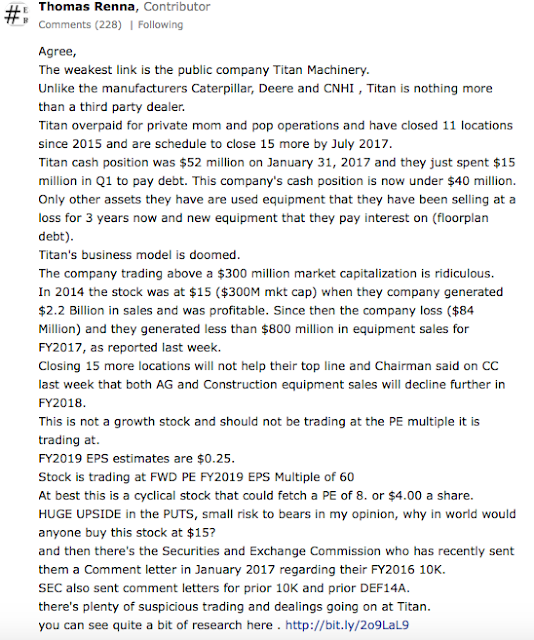 Posted by Equities Research at 9:47 AM No comments: